What Is The AR-15 Forward Assist And Why Do I Need It?

The AR-15 forward assist, a mechanical feature found on most AR-15 pattern rifles, is something that newbies might not totally understand. You’ll find the forward assist assembly on the right-hand side of your rifle (for most guns) directly below the charging handle.

Some details may get glossed over for the sake of brevity here, and since this is more for newbies…bear with me. Or get angry in the comments section.

The forward assist is a holdover feature from an older time, as semi-automatic rifles of the early to mid-20th century (M1, M1 Carbine, the M14, and others) had the capability of being forced into battery. There is some discussion of whether they should even be installed on a rifle in the first place, which we’ll go over in a bit. A forward assist is used to push the rifle’s bolt carrier groups closed. To actuate it, you press the button on the forward assist assembly. This moves the bolt forward and chambers a round. The intended effect is usually to force a round into the chamber if it hangs up for any reason, sort of like the old trick of hitting the slide of a semi-auto pistol with the heel of your hand in the case of a failure to feed.

The AR-15 forward assist was added to the rifle at the behest of the Army as Eugene Stoner (and the Air Force) actually didn’t believe it was necessary on his original design that became the M16 rifle. Colt created the forward assist assembly, including a pawl (the thing you press) a plunger (which engages with the receiver to send it forward) a spring and a roll pin. To actuate it, you press the pawl, pushing the plunger forward. That engages with teeth on the receiver, pushing it forward.

When the bolt carrier group closes, the forward assist spring pushes the pawl back out. A fairly simple device, all in all.

Since forward assists are standard equipment on AR-15 pattern rifles, there is an aftermarket industry of different pawl designs to customize your gun, such as those made by Strike Industries and many others. The feature was kept on civilian market AR-pattern rifles as, after all, lots of people want to buy the guns (or a facsimile thereof) that the professionals use so it had better look mil-spec.

Why would you use a forward assist? Basically to close the bolt if a round doesn’t fully seat in the chamber and holds the bolt open. It wasn’t an uncommon design feature for the day. As mentioned, the M1 Garand, M1 Carbine and M14 all had external forward assist functions (you could slam the bolt home if needed) as well. In the heat of battle, that’s a good thing to have…on paper, anyway. 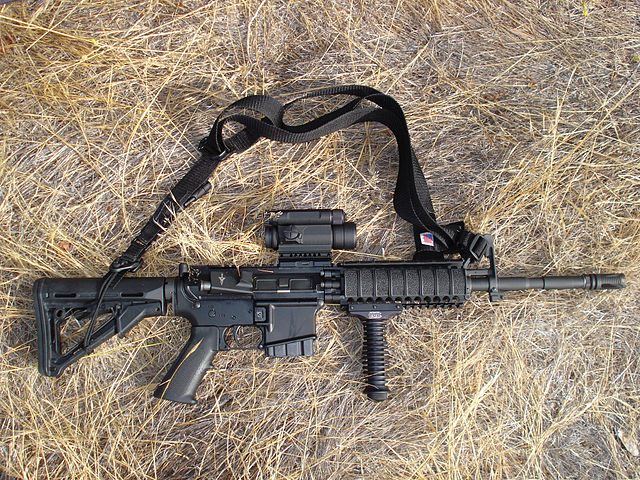 Now we get to the discussion of whether a forward assist is necessary.

First, there are a few different reasons why a cartridge will fail to feed. One reason is that you just have a bad round, which happens. Another is that you have a dirty bolt carrier and/or receiver, fouled by carbon deposits and other detritus. Another still is that the bolt carrier failed to return to battery due to a bad spring, improper shooting, act of God or what-have-you as semi-auto rifles can be touchier than bolt-action rifles.

Each of these problems is caused by something that a forward assist does nothing to ameliorate, though in the case of a rogue failure to feed, it can get the gun back into battery.

In any case, a malfunction is an indicator that Something Is Wrong. Forcing the gun to operate won’t correct that and could actually result in catastrophe. Additionally, the forward assist could completely seize the bolt carrier and receiver by forcing a deformed round into the chamber.

Since most AR-pattern rifles are owned by civilians who use them to punch paper…are they really that necessary?

Arguably not. A round can be cleared and the rifle returned to battery by pulling the charging handle in many cases. If insufficient cleaning and/or lubrication is the issue, the fix is time spent with a cleaning rod and patches.

What is the best thing to do, then, if you have a malfunction?

First, perform a press check or visual check that a round is chambered by pulling the charging handle back enough to open the bolt and have a look. (Make sure the rifle is pointed in a safe direction first, of course.) Unload by taking out the magazine and ejecting the round. Reload, and see if the issue repeats. If so, try moving the bolt by hand by pulling on it with a fingertip or moving it with your thumb.

If it doesn’t move or fully seat when pulled by a finger, chances are you have an issue that a forward assist won’t help with.

Hunters will sometimes use the forward assist in the field. They will slowly ride their charging handle closed to chamber a round. The idea is to close the bolt quietly so as not to spook game. Sometimes that results in a round not fully seating the the chamber. That’s when they’ll use the forward assist to push the bolt closed and fully chamber the round.

While arguably redundant, a forward assist can quickly get the gun back into battery in the right conditions and so so quickly. They’re functional, to be sure, but are also arguably unnecessary…though that isn’t going to stop a lot of AR-15 rifle makers from installing them.

What do you think, though? Necessary feature or useless relic? Sound off in the comments.