Benchmade’s 940 Osborne design and a few variants have been among the Oregon knife maker’s most popular designs for the last 20 years. If there’s an EDC knife hall of fame, the 940 with its distinctive “reverse tanto” blade design would have a prominent place near the front of the display. It’s a true classic and many consider it the best Benchmade design of all time.

For some reason, though, the 940 — and a couple of its upgraded variants — never really floated my boat. With its 3.4-inch S30V blade, it always looked a little long and gangly, at least to my jaundiced eye. And it’s never been inexpensive. I just didn’t want to lay out that kind of money for an EDC knife I wasn’t thrilled about.

But that’s me and Benchmade has sold thousands of these over the years to people who aren’t me…knives that have made their owners very happy. Now, during this 20th anniversary year for the 940, Benchmade has dropped a new take on the Warren Osborne design…the 945 Mini Osborne. Or, to be more accurate, the 945BK-1. What’s the difference between the original and the smaller version?

The Mini-Osborne is a scaled down size that, for many of us, now makes it the perfect size for an EDC blade. The original 940 Osborne has a 3.4-inch blade and a 7.9-inch overall length when open. That’s a good size knife.

The new smaller 945 shaves more than an inch off that overall measurement at 6¾ inches. And the 945’s blade gets in under the magic 3-inch limit at 2.92 inches. That makes it legal just about everywhere. The 945 is small, non-threatening and very pocketable. But it’s still just big enough to be a four-finger knife when opened…as long as you don’t have big paws. 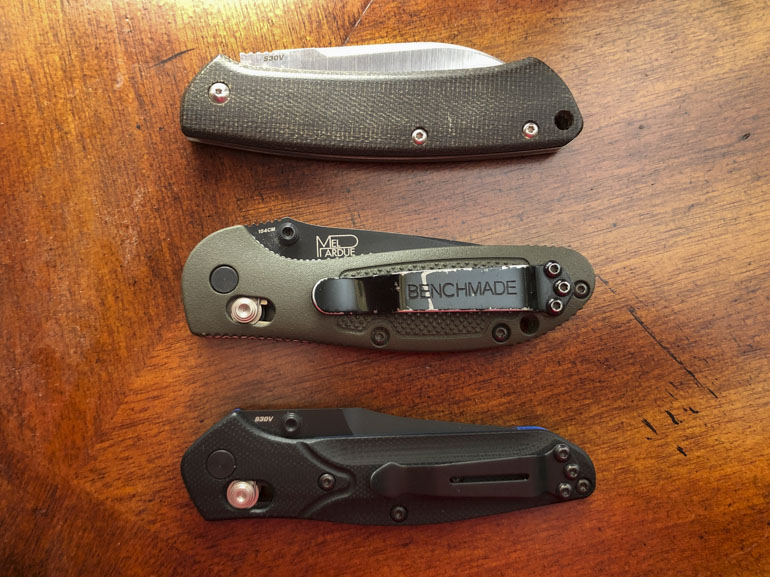 The new Mini Osborne is sized right in the sweet spot most people look for in an everyday carry folding knife. Here you see it alongside two other Benchmade classics, the Proper gentleman’s folder and the uber-popular Mini Griptilian. The 945 Mini Osborne is virtually identical in open and closed length to its Benchmade brethren. The 945’s blade design is the same as its popular bigger brother. Benchmade calls it a reverse tanto, but it’s really more like an angled sheepsfoot with a reasonable belly and plenty of slicing length. As for blade steel, Benchmade has chosen S30V for the Mini Osborne, the same steel that’s on the original, larger 940. S30V has become the base steel for most of Benchmade’s (relatively) lower priced knives.

Some will complain about that choice. While S30V is a good steel, many will expect a higher grade on a knife that runs you about $175 retail.

That’s a fair point. S30V is certainly a very good steel, but there are better these days that are available at prices that aren’t significantly higher. You could definitely argue that a $175 EDC knife should at least have a steel like S90V or Elmax and it would be hard to argue with you. The fact is, though, the only people who will really have an issue with S30V on the Mini Osborne are dedicated knife knuts.

In reality, S30V will more than meet the needs and uses of 95-plus percent of the people who will buy and carry the 945. It takes an edge easily enough, holds it reasonably well and is more than sufficiently corrosion resistant. My Proper has S30V and Benchmade has since upgraded the Mini Griptilian to S30V as well (although my Mini G is old enough to have 154CM). The 945’s grip has the same now-classic sculpted shape as its bigger brother. But instead of anodized aluminum like the original 940, the Mini-Osborne’s scales are made of a beautifully finished G10 that’s comfortable in the hand and doesn’t slip. Including it here was a very good choice by Benchmade. While I prefer a deep carry clip, the Mini Osborne’s clip keeps the knife reasonably discreet in your pocket. The clip on the Mini Osborne is unusually stiff…almost as stiff as a sculpted pocket clip. It has loosened slightly with a few weeks of use, but not much. You’ll never have to worry about your 945 working its way free and losing it. Another nice touch on the Mini Osborne are the accents. The 945 has attractive Benchmade blue liners and anodized aluminum standoffs that give the knife a distinctive, upgraded look. As for fit and finish, the 945 Mini Osborne was darn-near perfect right out of the box. There was zero blade play or slop and the blade is dead center between the scales when closed. The edges and joins are smooth and precise. The grind is clean and even and or you fidgeters, the action opens and closes effortlessly with a wonderful smoothness.

The only thing that made it darn-near perfect was the sharpness. The blade arrived sharp, just not razor sharp as you’d expect in a knife at this price point. A few passes on a ceramic steel was all it took to impart an arm-shaving edge.

But that’s a nitpick. Benchmade was rightly criticized in years past for the QC on some of the knives leaving their Oregon factory. Thankfully, those days seem to be long gone.

Overall the 945 Mini Osborne is an astonishingly good everyday carry knife. It’s amazing the improvement in overall appeal a simple reduction of 11-12% in size can make. Some won’t see the big deal in merely scaling the Osborne down from its full-size version, but it turned the venerable Osborne design from meh to marvelous, at least for me. It’s pushed all of my other daily carry choices back into the knife cabinet. The American-made 945 Mini Osborne isn’t inexpensive by any means. Lots of readers will wonder why anyone would spend three digits (let alone more than $40) on an EDC knife. Fortunately for Benchmade and a lot of other knife makers, there are plenty of us out here who are appreciative (insane?) enough about our knives and a good design to want to lay out that kind of money for a great daily carry blade.

The fact is, Benchmade has yet another real winner on its hands here. Yes, it’s “just” a smaller version of another classic, but one that will appeal to an even larger number of knife buyers. If you want a Benchmade, but can’t or won’t lay out $175, the Mini Griptilian and the newer Mini Bugout are excellent options at about $50-$60 less. But as great as those knives are, you’ll be missing something if you bypass the Mini Osborne. This is truly one of the best EDC knives on the market.