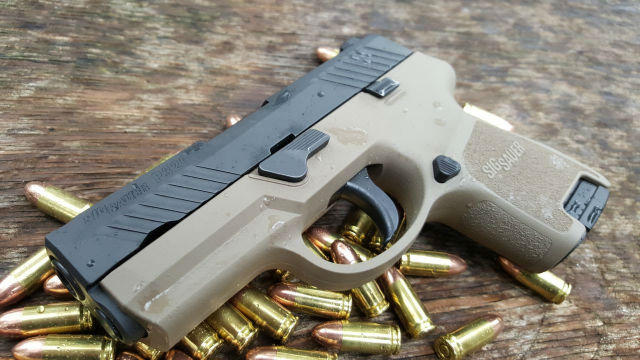 They make so many individual pistol models that a person could practically feel drunk looking at all the different Sig guns that they offer.

So let’s go have a quick look. Here are 6 Sig guns that are known to be excellent concealed carry guns, but cater to a specific set of needs, preferences and so on.

Sig P365: The Most Popular Of The Sig Guns For CCW

By now, everyone knows the Sig P365 is kind of the new standard by which concealed carry guns are judged. The half-stagger magazine brings capacity up to 10+1, 12+1 or 15+1 depending on the magazine used, and in a pistol that’s basically the same size as single-stack subcompacts like the Glock 43 and S&W M&P Shield.

They’re great shooters for their size, and…well… what hasn’t been said by this point? There are also P365 SAS and P365XL models – the latter with a 4-inch barrel and optics-ready slide – if the standard model isn’t to your liking.

Is it for everyone? Maybe not, and that’s okay. There are plenty of other great Sig guns for concealed carry.

Sig P320 XCompact: The Sig Gun That Out Glocks A Glock

Lots of pistols have been tipped as a “Glock Killer” over the years, but the Sig P320 XCompact is one of the best arguments for a different take on the poly/striker format. It has all the bells and whistles you could ask for.

The P320 XCompact is a P320 Compact with every improvement you could ask for, including Sig Sauer’s X frame, a straight trigger, night sights as standard and an optic adapter plate in case you want to mount an optic.

It’s ergonomically as good as a CZ. The trigger is outstanding, in the same class as a VP9 or Walther PPQ. You can mount an optic if you want, and not if you don’t. Few guns as a product have as many upsides with as few downsides. 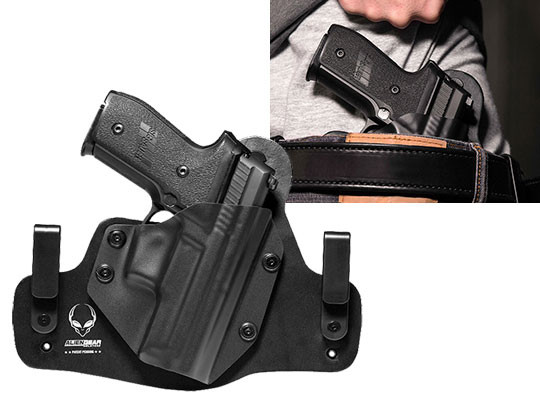 If you wanted an old school Sig gun for concealed carry, that’s the P229. It’s a compact variant of the P226, with a shorter barrel/slide and grip for easier carry. Dimensionally, it’s about the same size as a Glock 19, though a bit heavier due to having a metal frame.

The Sig P229 is a bit of a commitment. It’s heavy compared to modern concealed carry pistols, and the DA/SA trigger takes training to master. Granted, the P229 is one of the best; it’s been issued to and carried by military personnel and police for decades. Normally chambered in 9mm, but it can also be had in .40 S&W and, with a bit of searching, .357 Sig.

It’s the kind of gun you can invest in and have for life, without doubt, accurate, reliable and dependable…but like any other pistol, it might not be for everyone.

Some people still like the 1911 – for a lot of good reasons! – and it happens that Sig Sauer makes some excellent 1911 pistols. Most of their lineup are full-size (Gov’t frames) but they still have at least one Commander in the lineup, the Sig 1911 Fastback Emperor Scorpion Carry. Granted, it’s a commitment; it’s a big all-steel gun, but a Commander is a little easier to carry than a full-size in terms of dimensions.

It has a lot of popular features for a 1911 for concealed carry. The grip is bobbed for easier concealment. A beavertail grip safety and ring hammer for easier shooting, and Novak-style sights to aid in shooting accurately. Black G10 grips, and 25 LPI checkering on the front of the grip for a good, tight grip in all conditions. It comes with a FDE PVD finish, which means it’s tactical. Granted, that word basically doesn’t mean anything anymore, but apparently people go nuts for FDE stuff these days.

It’s a Commander with bells and whistles that normally drive the price tag out of reach for…almost everyone. Granted, Sig 1911s aren’t cheap either, but relative to, say, an Ed Brown bobtail…it’s a bargain. And a heck of a pistol, regardless. 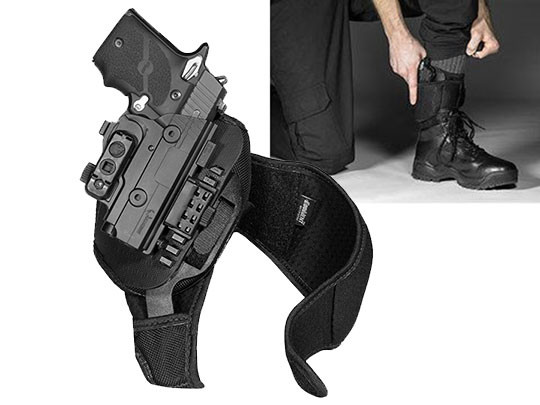 Another one of the all-time most popular Sig gun models for concealed carry is the Sig P938. The P938 is a micro 1911, sized up for 9mm. A few different gun companies made a copy of a Colt Mustang (look, a spade is a spade) but Sig Sauer had the bright idea to make a version in 9mm, which is the most popular caliber for personal defense.

Granted, so did Kimber. And so did Springfield Armory. But we’re talking about Sig guns, here.

Unlike the full-size 1911 pistols, there’s no grip safety to worry about. Capacity is 6+1 or 7+1, depending on the magazine. The firing mechanism is single-action, and night sights are factory-standard on some models. If you wanted a sleek, slim backup gun or prefer to carry the smallest pistol possible, the Sig P938 is a great choice.

Sig P320 Compact: The First Of The New Breed Of Sig Gun For Carry 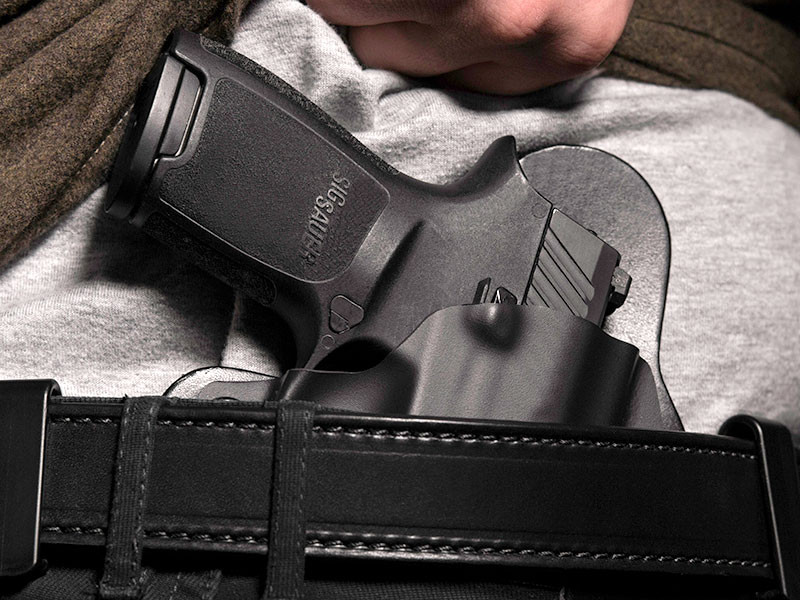 The Sig P320 Compact was one of the P320’s concealed carry oriented models when the P320 was launched some years ago, and of course it’s still in production. And it’s still a great pick among the Sig guns for a concealed carry gun.

Dimensions and specifications are broadly similar to a Glock 19, so it’s solidly in the compact class, and has a standard capacity of 15+1 of 9mm. However, you can also find it chambered in .40 S&W, .357 Sig and .45 ACP with a bit of hunting.

It may not have the bells and whistles of some other models, but it’s a solid working-class handgun. If the standard model doesn’t do it for you, there’s also the Carry model, which has a full-length grip for an extra 2 rounds of capacity, or the P320 M18, the compact variant of the M18 pistol in service with the US military, replete with manual safeties