6 Star Wars Guns From A Galaxy Far, Far Away

Star Wars Guns: What Guns Knew The Power Of The Dark Side?

Plenty of modern day firearms get referred to as “Star Wars guns” due to a whole bunch of plastic or otherwise futuristic appearance. (H&K XM8, anyone?) But what about the actual guns used in “Star Wars”?

Don’t be too proud of some tactical terror you’ve constructed. The ability to pew pew pew is insignificant next to the power of The Force.

So, to celebrate May the 4th (May the 4th be with you!) here are the actual “Star Wars” guns, the guns used in the movies.

First is the Mauser C96, the “Broomhandle Mauser.” The special effects team added a compensator/muzzle brake and scope to create Han Solo’s blaster.

Hokey religions and ancient weapons are no match for a blaster at your side. As it happens, the Mauser C96 was one of the best of the day.

The C96 was one of the first successful semi-autos, though it was something of a transitional gun prior to the modern semi-automatic pistol design, which (of course) pretty much started with John Browning. The C96 was loaded by stripper clips, with internal magazine forward of the trigger group. The pistol is single-action, with an actual reciprocating bolt instead of a slide, almost like a scaled-down rifle. The design is robust, and the gun was known for being quite accurate. The typical chambering was the potent 7.62x25mm Mauser, which typically achieved about 1450 fps and 400+ ft-lbs of energy, which was at the time the most powerful handgun cartridge in production, and made the pistol effective to 200 meters.

While issued selectively by some militaries it was costly (also complicated and prone to breakage) though it was popular among well-heeled officers of the British military (and others) and thus became something of a gentleman’s sidearm. Winston Churchill bought one for his service in the Boer war, successfully using it in combat.

Another of the most famous “Star Wars” guns is the Sterling submachine gun. You know it as a Stormtrooper’s blaster.

Stormtroopers never hit anything according to the memes, but the Sterling SMG was known for being more controllable, reliable and accurate than the Sten gun it replaced. The Sterling SMG was in service with the British army from 1953 to 1994, and saw service in other countries as well.

The Sterling SMG is a straight-blowback operated 9mm submachine gun. More or less, it’s an improved Sten, with helical grooves in the receiver to reduce fouling and a dual captive recoil spring for reduced recoil and more reliable cycling. Barely any modification was done to make it into a blaster; the folding stock was removed but the folding forward grip was left on. About the only addition by the props department was a barrel cover and a scope. 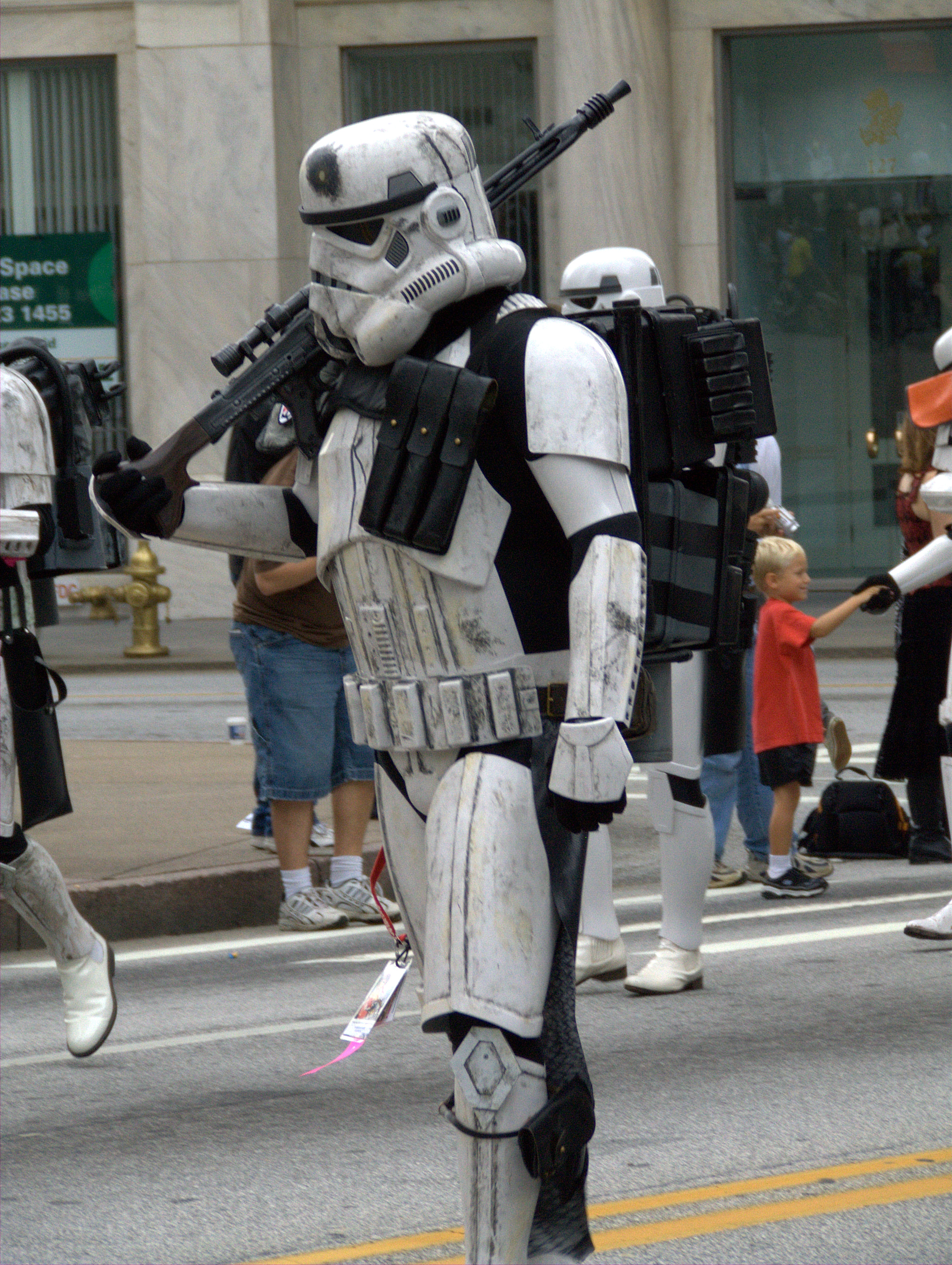 Another real gun that was modified by the props department more than once was the MG 42, or Maschinegewehr 42, the general purpose machine gun of the German army, first adopted in 1942.

The MG 42 was often referred to as “Hitler’s buzzsaw,” being a belt-fed 8mm Mauser machine gun with a cyclic rate of 1,200 rounds per minute. It was simpler and more reliable than the MG 34 it replaced, and was the basis of the Wehrmacht’s squad tactics for…pretty much the whole war. It was an awful weapon to be on the wrong end of.

In fact, it was so darned good that the German army had it converted to 7.62mm NATO in 1959, and are still using them.

Whomever the armorer was for the “Star Wars” movies, they had taste, because a few characters popped up with a modified P-08 Luger. Most notably, Princess Leia (RIP Carrie Fisher) had one as her sidearm in “Return Of The Jedi.”

The P-08 Luger is easily one of the most iconic pistols ever made. It had a very strange toggle-link action with a fixed barrel, giving it an impossibly low bore axis. While delicate, difficult (and expensive) to manufacture, it was known to be reliable, very accurate, and a very sweet shooter.

Webley Flare Gun: The “Star Wars” Gun Of The Most Famous Bounty Hunter

Another one of the famous “Star Wars” guns is the one belonging to Boba Fett, arguably the most famous bounty hunter in fiction. Boba Fett’s carbine is a Webley flare gun with a big tube stuck on the front and a scope mounted to the top. The grip is instantly recognizable as a Webley, of course.

Webley, of course, is better-known for the Webley-Scott revolvers, which were the service pistol of Britain from the late 19th century until the 1950s, when they adopted the Browning Hi Power.

Another big machine gun that stormtroopers often had in the movies was a Lewis gun, formerly the light machine gun of the British armed forces from about the start of WWI until the mid-50s.

In fact, the props department didn’t change anything. The Lewis guns used in the Star Wars movies left the barrel shroud – essentially a radiator that air-cooled the barrel – and the pan magazine on the gun and just handed them to guys in white plastic body armor.

The Lewis Gun was one of the best light machine guns of the day, serving as the primary LMG of the British (and other) armed forces for both World Wars and Korea.